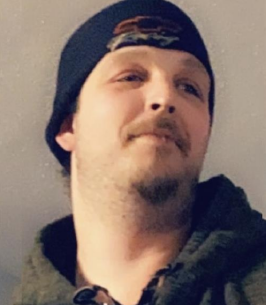 New Hampton - Christopher (Chris) J. Leclerc, 40, passed away peacefully on Saturday June 25th, after a courageous year and a half battle with glioblastoma (brain cancer).

Chris was Born in Concord NH. to the proud parents Bradford J and Penny (Barney) Leclerc on March 5, 1982. He grew up in Bow, then moved to Meredith as a teen. Later in life moving to New Hampton, Making many friends along the way.

Growing up Chris enjoyed Family gatherings, Hanging with his cousin Dustin, and friends. Chris also enjoyed snowmobile rides, working with his father landscaping, or plowing. Chris loved to camp along the Kancamagus highway, and Saco River with his family. Chris and his brother Josh made many memories when they would go out to poker night, it was there time together.

Chris loved his mother’s cooking, it showed he was a very big man. He also cared very deeply for his little sister Millissa and good friend Bryant (B). Chris was lucky enough to find love again and married Tabatha Lamprey, only one year ago. After illness struck, Chris enjoyed power chair rides through the Basin with picnic lunches with his mom and dad. He also enjoyed car rides north with Tabby, they even have a special spot.

Chris loved the band Korn; he was lucky to be able to attend two concerts with his cousin Dustin and good friend Bryant. Chris just enjoyed time at home with his kids, wife, family, and friends. Chris made many friends working at Mobil; Chris will be missed by many.

Visitation will be at Mayhew Funeral Home in Meredith on Saturday July 9, 2022, from 11:00 am Till 1:00 pm. Followed by a grave side service at 2:30 at New Hampton Cemetery. At this time anyone wishing to talk about Chris and what he meant to them may do so. It is requested to wear something red, his favorite color. there will be an informal gathering for any family and friends who wish to stop in at the New Hampton Community Church, 14 Church Lane, New Hampton, NH immediately following.